How One Fisherman Eliminated Diesel Bug for Good

Having grown up in the traditional fishing village of Flushing, Peter Laity believes big cities are far worse than the roughest going at sea. He also believes in knowing and helping your neighbour so it's plain to see why after 35 years fishing he values the teamwork his 5 man crew, 2 of which are his sons, bring to his vessel Ocean Pride.

The Problem - The Sudden Appearance of Diesel Bug
After changing fuel companies Peter suddenly noticed an oily slimy residue in their filters. He knew that this was bad news for his engine. The Ocean Pride sails from Newlyn and lands in France, fishing with the diesel bug in their tanks meant on each 2 week fishing-trip she was going through 4 filters. Although not the most expensive item on board nobody wants to be changing filters out at sea, it slows you down. Peter later found a transfer pipe with a small hole, meaning that bulge water could have found its way in to the tanks. This clearly demonstrates how easy it is to get the bug and how quickly it can take hold. As Peter himself says:

“Whatever the reason you can’t have that stuff running through your engine and we can’t take the risk of it happening again”.

Why the Marine Fuel Purifier?
There are obviously lots of ways to deal with this, Peter could have dosed his tank with a broad spectrum biocide; however, he recognizes that using biocide is a reactive solution and he wanted a something more reliable that he could trust to ensure that the bug couldn’t take hold again. Having seen the unit demonstrated at SkipperExpo in Bournemouth Peter’s opinion?

“Its silly not to fit one especially considering just how little it costs”.

Verdict
“It’s all going very well and we are definitely not going through nearly so many filters as we were. It was fitted as part of the routine maintenance and took not time at all". It’s a very easy way to clear up a very big problem. 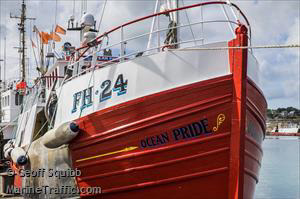 Peter's 600hp Deawoo engine was perfectly suited to the MFP 800 which typically costs £575.

Ocean Pride has a 600hp Daewoo engine and the MFP800 which Peter installed can easily handle the 96 litres an hour that pumps through his tanks.
Email us now for more information